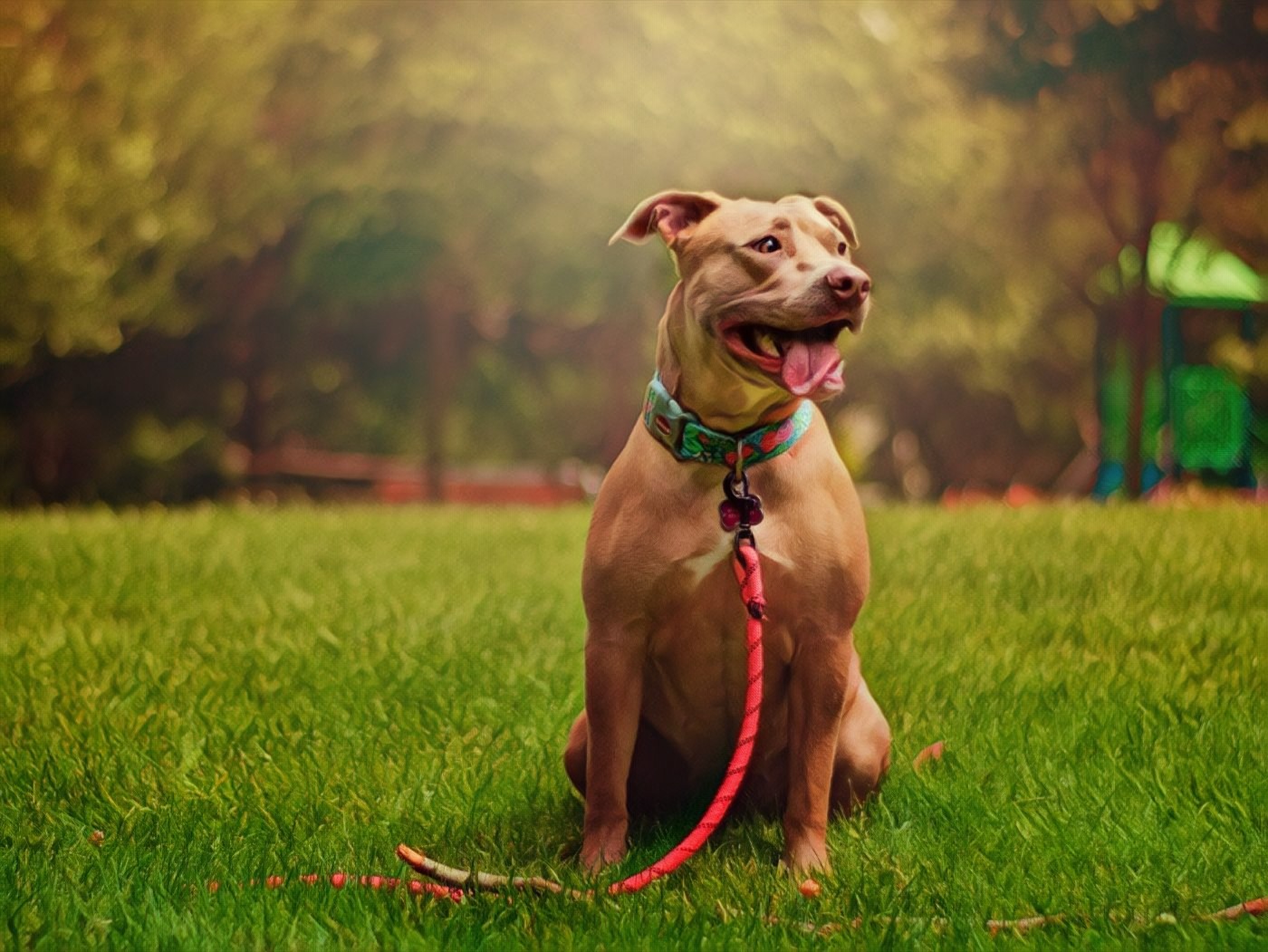 Unfortunately, there’s no quick and easy answer to this question. What makes a dog easy to train depends just as much on you and your individual circumstances as it does on the dog’s breed. The only way you can answer this question for yourself is by considering your needs and abilities carefully and doing your research.

Are smart dogs easier to train?

A common myth is that a smart dog is an easy dog. You’ll hear people praising the intelligence of border collies, German shepherds, and other working breeds. However, smart dogs–or dogs with a high working drive–need mental stimulation and crave training in a way that other dogs might not. For some people, this might be a match made in heaven. Others might find that they’re in over their heads!

Coren measured canine intelligence based on how quickly a dog learned new commands and obeyed them. This approach heavily prioritizes working intelligence over other metrics and falsely draws a connection between intelligence and a dog’s desire to please.

Always consider carefully what you’re equipped to provide in terms of mental stimulation. A dog that loves to work may often be a dog that needs to work–if you don’t have a job for them, they may invent one themselves!

What is an easy dog?

All right, smart dogs might not be easy dogs. Then what is?

As always, the answer depends on your lifestyle and compatibility. Start by asking yourself what your experience level with dog ownership is, how much time you can devote to exercise and play daily, and what your ideal day with your dog looks like. “Easy” is a broad term, encompassing practical issues such as: your physical ability to handle a large breed, the level of grooming you’re able to provide, or your tolerance for hair or drool. Some dog breeds are known to be more aloof, while others are nicknamed “velcro dogs” because of their desire to cling.

One important distinction to keep in mind is the difference between intelligence and biddability, or a dog’s willingness to work. A dog might have high working intelligence but low biddability. Afghan hounds infamously ranked as one of the least intelligent dogs, but fans of the breed quickly defended them as stubborn and independent, or even catlike.

More than half the dogs in America are members of the All-American Dog breed, making them the most popular dog in the country. This dog breed contains so much variety in appearance, temperament, intelligence, and size that, given time, you’re virtually guaranteed to find the right fit.

In 2014, the Westminster Dog Show opened its doors to mixed breed dogs, coyly terming its participants “All-American Dogs.” Dogs of all breeds were able to compete in agility and demonstrate their abilities alongside their purebred cousins.

While some breeds have been around for thousands of years, the modern concept of a dog breed began in Victorian England–less than 200 years ago. The story of George Augustus Graham’s efforts to crossbreed mixed breed dogs to create the Irish wolfhound illustrates how every breed can, sooner or later, trace its lineage back to the noble mutt.

Do your breed research

Most people think that purchasing a purebred dog offers more predictability. Traditionally, this was often the case, as breeders selected dogs that offered specific behaviors or demonstrated certain traits.

More recently, due to market demand and in some part to flaws in breed standards, breeders sometimes select for looks alone, rather than behavior. This means that traditional breeds no longer breed true to type and lack predictability in outcome. Furthermore, every dog is an individual, creating more variation.

The truth is that crossbreeding for health has always been a part of normal breeding practice. Graham was speculated to have introduced Great Danes, Tibetan mastiffs, and greyhounds along with Scottish deerhounds to create the Irish wolfhound. The Dalmatian Backcross Project introduced an English pointer into a Dalmatian line in an effort to breed out hyperuricemia. The Hillshires kennel has been backcrossing mastiffs with greyhounds to improve health and soundness.

Is there an age that’s easier to train?

Bringing home a puppy between 8 to 20 weeks of age gives you the most control over their early experiences, allowing you to ensure adequate socialization, catch and fix early temperament issues, and install bite inhibition. And as a bonus, they’re super cute.

The cons? They don’t always sleep through the night, they pee nonstop, they bark and whine, and they have a mouth full of needle teeth.

Kathy Callahan, CPDT-KA, encourages empathy during that first year. Puppies are essentially baby aliens kidnapped from another planet, and as hard as it is for you, it’s even harder for the little ones who’ve their families behind to inhabit a world where everyone towers over them and speaks a language they don’t understand. That it’s a normal and necessary part of a dog’s life makes very little difference to them.

But there’s no way out of it–the first year of a dog’s life often requires the most from you, especially as they leave behind puppyhood and sail into the turbulent waters of canine adolescence. If that doesn’t sound like a good fit for you, consider adopting an adult dog.

There’s no shortage of adult dogs available, especially through shelters or rescues. Many are temporarily housed in foster homes that can provide detailed feedback about energy and temperament. Adult dogs frequently boast higher levels of focus than their infant counterparts, making them much easier to train, and usually well out of the chew everything phase.

Bringing a dog home should never be an impulsive decision. Two people may have wildly different opinions on what the easiest dog to train is; the answer will always vary from person to person. Modern dog training revolves around setting your dog up for success, a philosophy that applies to humans as well. In this case, that means doing the research to find the right dog for your home.

View all
When do puppies lose their baby teeth? 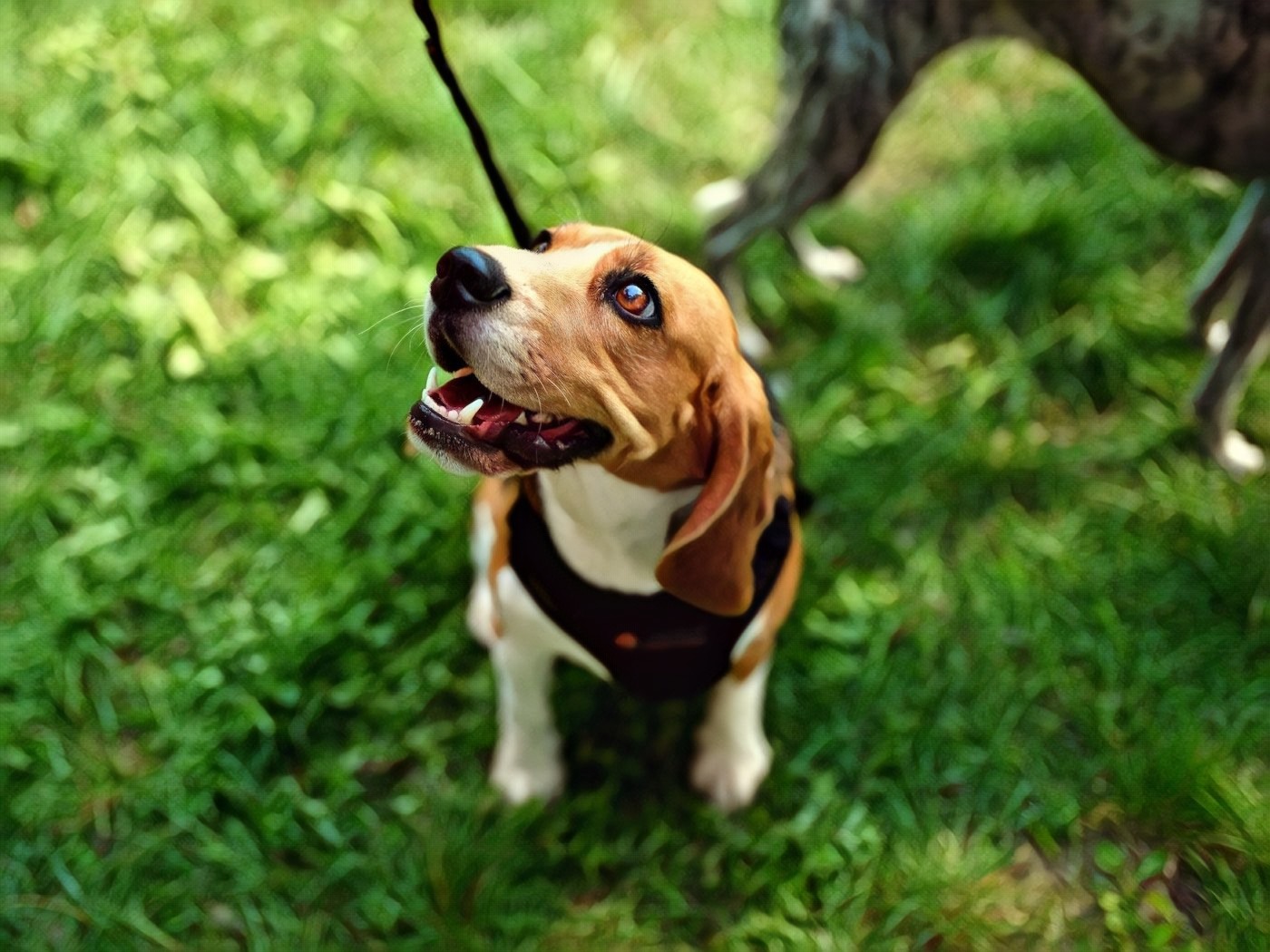 When do puppies lose their baby teeth?

Melody Lee
,
Contributing Writer
View all
How do you tire out your puppy? 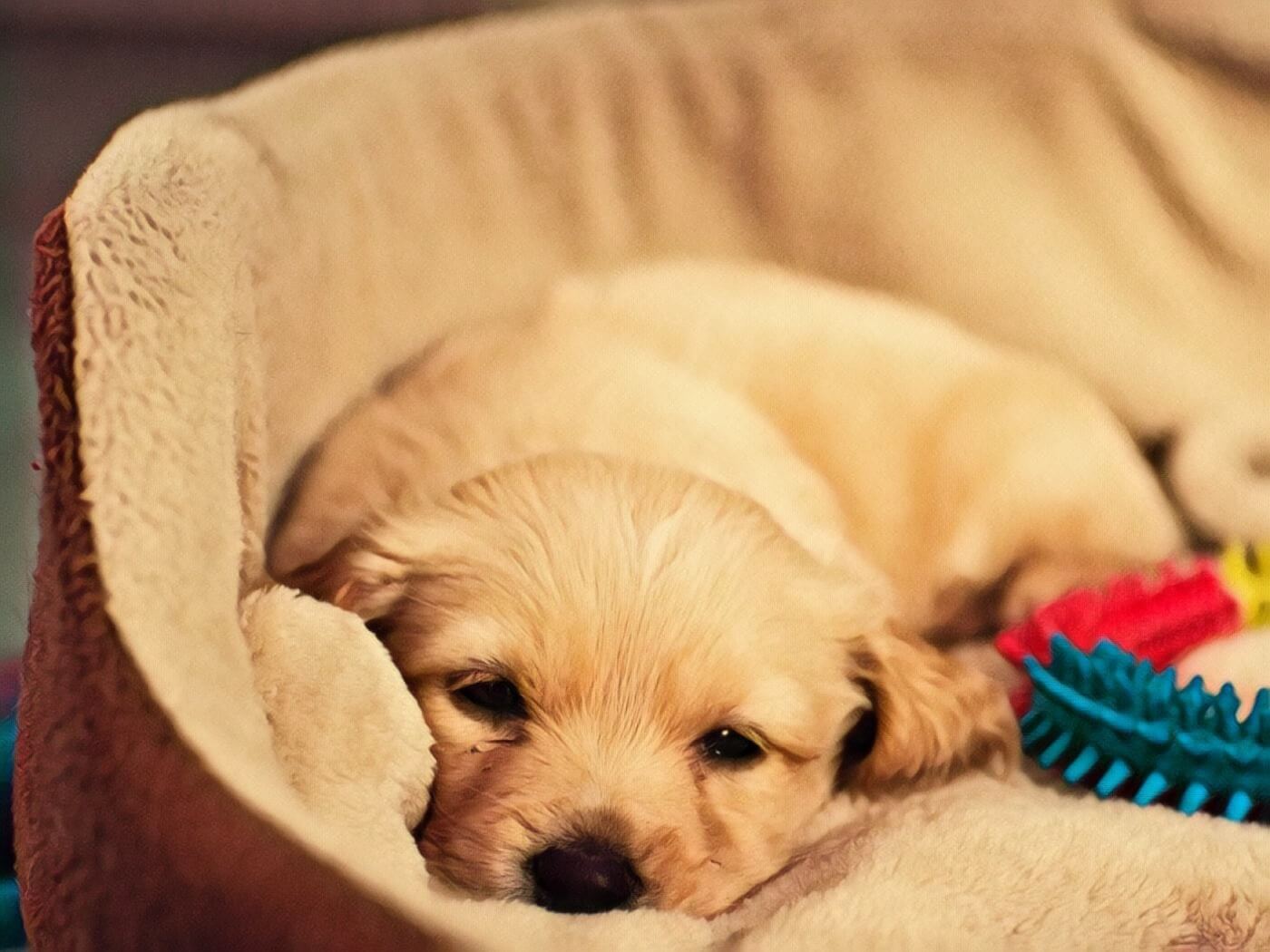 How do you tire out your puppy?

Melody Lee
,
Contributing Writer
View all
Why do dogs sleep at your feet? 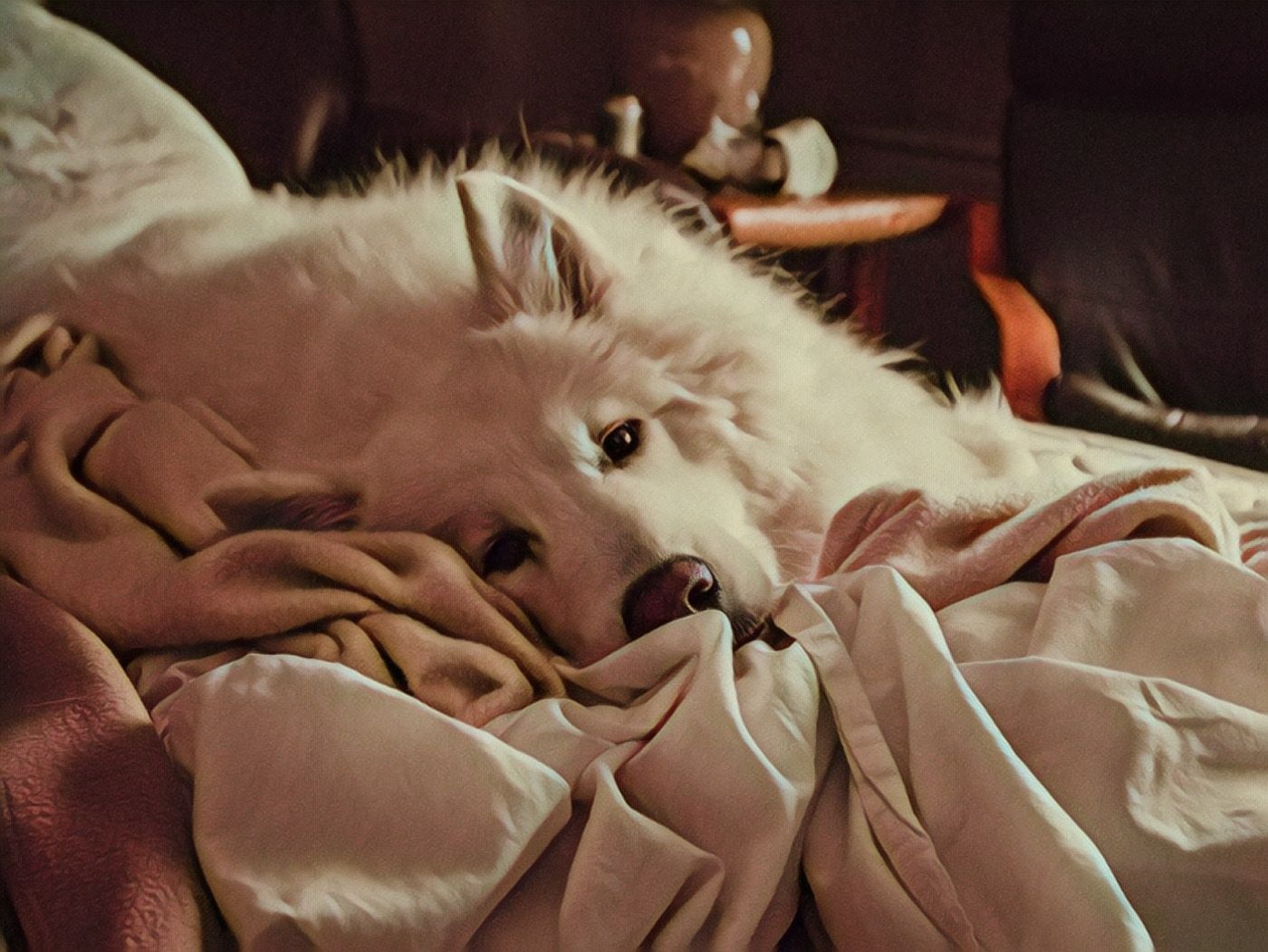 Why do dogs sleep at your feet?